Showing posts from July, 2010
Show all

By B. Lowenthal - July 31, 2010
Queen Emma Foundation v. Tatibouet (ICA July 29, 2010) Background. The Queen Emma Foundation leased hotel property in Waikiki to Tatibouet. The lease stated that if Tatibouet wanted to covert the property into a condominium, the Foundation would have to be somehow involved in the process. Tatibouet went ahead in the condominium process with Coral Reef Development as the developer. The Foundation learned about the selling of condominium units in the newspaper and soon brought an action for declaratory and injunctive relief based on the Foundation's interpretation of the lease. The circuit court interpreted the lease and ruled for the Foundation. The circuit court also found the Foundation to be a "prevailing party" and awarded $534,708.73 in attorney's fees and costs. Tatibouet appealed. During the appeal, Tatibouet filed for bankruptcy and lost his lease over the property and the Coral Reef Development was terminated. The Foundation filed before t
Post a Comment
Read more

By B. Lowenthal - July 24, 2010
State v. Brooks (ICA July 22, 2010) Background. Brooks was charged with kidnapping in the first degree, robbery in the first degree, and unauthorized control of a propelled vehicle. At trial, Tuan Vo testified he picked up Barbara Pichay and William Brooks in his taxi van. After driving around for a bit, they spotted Dennis. William got out the van and talked to Dennis. They called each other brothers and Vo saw them fist bump. Dennis got into the van and sat in the front seat while William and Barbara sat in the backseat. They told Vo to go to Kalihi. When they got there, William put his arm around Vo's neck, pulled Vo against the seat, and held a knife to Vo. The passengers took all of Vo's money and possessions. William pulled Vo into the back seat and Dennis got into the driver's seat. Dennis drove to Kaneohe, then Pearl Harbor, and then to Waianae. On the way to Waianae, Dennis and William switched places. Dennis, according to Vo, stomped on Vo's h
Post a Comment
Read more

When a Right of Action Derives from the Constitution . . .

By Hawaii Legal News - July 11, 2010
County of Hawai'i v. Ala Loop Homeowners et al. (HSC July 9, 2010) Background. Waiola Waters of Life Charter School, a "new century" charter school pursuant to HRS chapter 302A, acquired a 28-acre farm on Ala Loop Road near Kurtistown on the Big Island. Waiola intended on keeping the farm, but was also going to use it as a campus. Concerned residents formed the Ala Loop Association wrote to the County. The County and the State took the position that HRS § 302A-1184 exempted Waiola from state zoning laws in HRS 205, but did not exempt county zoning laws. Ala Loop argued that a special use permit pursuant to HRS § 205-A, the Land Use Commission rules, and county zoning laws were required. The County filed a complaint for declaratory relief against Ala Loop and Waiola to determine the applicability of state and county zoning laws. Ala Loop filed a counter claim against the County and a cross-claim against Waiola. Waiola tried to get the Attorney General's Office to rep
Post a Comment
Read more 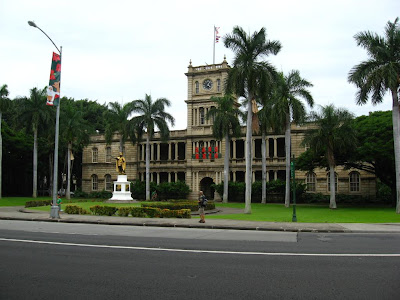 Hawai'i Courthouse Photo Contest. Aloha, from Hawai'i Legal News. We are happy to announce our first photograph contest. Please submit your photograph of any Hawai'i courthouse (it does not have to be an active courthouse). Winners will be featured in the 2011 Hawai'i Legal News Calendar. Submit your photograph today! RULES 1. Hawai'i Legal News is looking for compelling, original pictures that feature active and inactive courthouses throughout the State of Hawai'i. This includes any building that held court--be it appellate or trial court--for the State of Hawai'i, the federal government, the Territory of Hawai'i, the Provisional Government, the Republic of Hawai'i, or the Hawaiian Kingdom. Pictures can feature the exterior of the building or the interior courthouse. We will also accept the sites for particularly interesting or famous Congressional or legislative hearings or agency hearings. 2. All entrie
Post a Comment
Read more

Not Every Violation Belongs on a Traffic Abstract

By B. Lowenthal - July 02, 2010
State v. Cooley (ICA June 30, 2010) Background. The State charged Cooley with possession of an alcoholic beverage at Waialae Beach Park, a public area. Revised Ordinances of Honolulu § 40-1.2. The offense is a petty misdemeanor. ROH § 40-1.3. At his arraignment, the State moved to amend the charge to the consumption of an intoxicating liquor at a scenic look out, which is a violation. HRS § 291-3.3. The district court granted the motion and ordered Cooley to pay $27.00 in fees and fines. The violation appeared on Cooley's traffic record. Cooley filed a motion to correct the abstract of traffic record on the grounds that HRS § 291-3.3 was not a "moving violation." The district court denied the motion and concluded that Cooley "waived any defense that the consumption of the intoxicating liquor at the scenic lookout had to have arisen from the operation of a motor vehicle." Cooley filed a motion for reconsideration and requested a hearing. That too
1 comment
Read more
More posts